The indie band, The Lines, formed in 2003 in Wolverhampton. Having released their debut album in October last year, they have steadily gained a long string of loyal fans.

Openly admitting I’d never heard of The Lines, a friend in work passed me their CD and I was pleasantly surprised by how good they are.

Sounding at times like a collaboration of some of the most influential indie bands such as Oasis and Kasabian, they definitely deserve more recognition than they currently have. 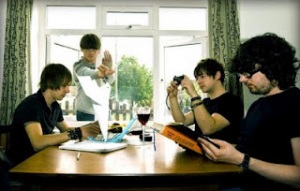 The lead singer, Alex Ohm, sells the songs with his strong vocals which seep his enthusiasm and passion. Combine this with the band’s tight performance and you have one hell of an indie record.

Catchy lyrics are definitely their thing. The anthemic lyrics of El Matador’s chorus, “I make mistakes, I’ve made my mistakes” and Kick Your Shoes Off’s sing-a-long chorus, “Kick Your Shoes Off, follow my lead” make these tracks especially memorable.

The record offers a little something for everyone, ranging from the more upbeat numbers like How It Should Be to the more sombre, reflective and acoustic tones of We’ve Been Here Before and Over &amp; Out.

Very rarely is there an album where you like every single track. The Lines, however, have managed to achieve this. Not one song is terrible, contains cheesy lyrics or drab music. Every track adds something to the record and it’s not often this is done.

Tagged as The Lines

Portland quintet, Blitzen Trapper, have just released that their sixth studio album, American Goldwing, will be out on September 12 on Sub Pop Records.

Luckily, I’ve got hold of a free track for you all to listen to. It’s the title track, American Goldwing.

Blitzen Trapper are a modern day Lynyrd Skynyrd (without the racism and hopefully drugs). Becoming recognised for their ability to tell stories in their lyrics, they have not failed to provide such stories in their newest batch of songs.

Blitzen Trapper and a pug dog...

Vocalist, Mark Earley describes the album: “American Goldwing is us letting our loves and early influences hang out for all to see.

“We entered into the sounds we grew up with – the hard guitar rock and country picking of our younger years mixed with glimmers of our usual space-aging technology and pawn shop Casios”.

This album is by Earley’s own admission: “…heavy guitar riffs and blasting drum fills live side-by-side with plucking banjos, wailing harmonicas and muddy slide guitars. The earthiness of these songs will make you want to get loaded and get in a fight, or find a girl and fall in love forever, simultaneously.”

Take a listen to the track here.

So the blues inspired duo, Hyde & Beast, have released a new video for their latest (and first official) single, Never Come Back.

Not only this, they’ve announced that their debut album, Slow Down, will be released on August 15 on their own record label, Tail Feather Records.

Never Come Back is, as much as I hate to say it, even better than And The Pictures In The Sky. It has more musical accompaniment to it with the added extra of a trumpet during the chorus.

Once again, Dave Hyde’s vocals are outstanding with him easily sending shivers running down your spine. His lack of try hard to sound good just gives his voice such a relaxing and accessible sound. Usually, he’s found behind a drum kit but I definitely think he should be the one standing tall with a mic in his hand.

Never Come Back shows the more playful side of the band with upbeat music and extremely catchy lyrics. You are guaranteed to be singing the chorus for days, especially with the break and re-introduction of the chorus at the end of the track. Another element that is bound to get you talking about this song.

Hyde & Beast are a duo not to be missed. Who’d have thought that something that was supposed to be a few mates mucking around in a studio would turn into such a well produced, interesting band? Not me but I’m sure glad it did.

Never Come Back is out August 8.

After their spooky teaser trailer for Portamento, The Drums have finally released more details about their second album, which is out on September 12.

The first track to be taken from the new record, Money, was aired on Radio 1 last Tuesday. It also now available for streaming online.

Money stays true to The Drums’ original sound. The beach song sounds typically found in their hits such as Let’s Go Surfing are still plentiful but the album is said to have a deeper, more personal tone for lyricist Jonny Pierce.

It’s a great summer song with happy guitar and bubbly lyrics. Jonny Pierce’s vocals have an element of the 80s about them, a slight hint of Duran Duran perhaps. Mix this with the beach style of the music and you have a perfect track.

Take a listen for yourself – Money

Money is out on September 5.

In conjunction with the release of their heavily anticipated second album, the trio is doing a string of gigs in the run up to the release date. The dates are as follows:

Tagged as Money, Portamento, The Drums

Since the release of their third album, Civilian, earlier this year, Wye Oak have continued to grow in popularity in the UK.

The duo, Jenn Wasner and Andy Slack, have now released details of their European tour. On some of the dates they will be supporting The National, showing just how far they’ve come this year alone.

Holy Holy is their current single and is completely different from the previous single, Civilian. While Civilian was a dark song with sad and lonesome lyrics, Holy Holy shows another side to this band. It is much more upbeat with rock influenced guitar contrasting with Jenn Wasner angelic and soft vocals.