B.o.B Definitely Has The Magic!

B.o.B is the man behind the genius track that was ‘Airplanes‘ which hit the charts earlier this year. Using samples from Hayley Williams of Paramore proved to be one of the most cunning things he could have done.

By blending two genres of music he managed to create something quite spectacular. There wasn’t a person who wasn’t caught singing, “Can we pretend that airplanes in the night sky are like shooting stars?” as they went about their day. 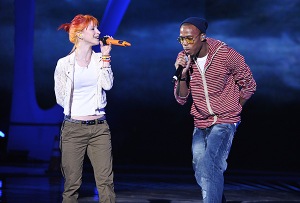 B.o.B and Hayley Williams performing together

A few weeks ago, he released his third single from his album ‘The Adventures of Bobby Ray’. Again he’s used samples from another rock band, Weezer’s front man, Rivers Cuomo (this being a hint that he knows the rock/R ‘n’ B collaboration is getting the thumbs up). The new song is titled ‘Magic‘ and do you know what? It’s just that.

Jay-Z and Linkin’ Park tried mixing genres a couple of years back, it worked but it never worked as well as B.o.B’s triumphs. Their attempt was too much of one type of music with too many lyrics from the other end of the scale.

B.o.B, however, has got the balance right and knows that it’s working. He mixes music which has strong elements of rock blended sufficiently with those elements that trade mark it to the R ‘n’ B genre. This in itself is a very clever marketing strategy.

As much as I hate to think that this cunning plan of his is about making money, it probably is. By using these two genres of music his audience most likely doubles in size. Those fans that like Paramore or Weezer will listen to these tracks through loyalty. The other side of the audience will be listening because they like the R ‘n’ B or Hip-Hop scene. Clever huh?

The hooks within his songs are also an important aspect and one of the main reasons why the tune floats around in your head all day long. Lyrics like “I got the magic in me, everytime I touch that track it turns it into gold” feature throughout the song on a repetitive loop leading the listener to hum it well after they’ve heard it played.

Whilst driving along the motorway on my way home, Greg James announces on the radio that he’s going to play Pink’s new single ‘Raise Your Glass‘. I automatically think ‘Great!’ and start getting quite excited to see what she’s come up with this time. 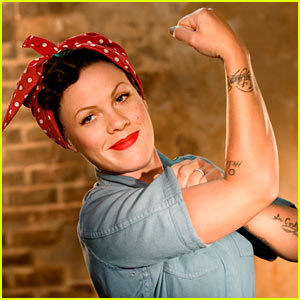 Snapshot of Pink in her new video for Raise Your Glass

As the song bursts through my car speakers, my heart sinks. After such a fantastically written album like ‘Funhouse’, she has produced absolute dribble with this one.

She’s written the song to accompany her many other hits on her ‘Greatest Hits – So Far’ album due for release on November 15. Personally, I don’t think she should have bothered.

Within the first 15 seconds, you hear lyrics like ‘What’s the dealio?’ and later on ‘Don’t be fancy, just get dancey’. It felt like Hannah Montana was singing to me.

‘Funhouse’ ticks all the right boxes. It has catchy, hummable music with meaningful lyrics. At the time, Pink was going through a relationship break-up with husband, Carey Hart, and consequently produced songs that had feeling and a sense of sadness. It was an album everyone could associate with and feel her pain.

Now she’s back with her husband everything’s great and she’s happy but her lyrics are horrendous. Instead of writing about emotions she’s now writing about partying which makes her new single sound like a nonsense nursery rhyme.

Not to despair though! It is done in true Pink style – she’s original and this single is definitely that. It is a fun and memorable tune which will have your feet tapping. I’m sure it will get a lot of thumbs up from other people but for me, it just doesn’t work. I’m nothing but disappointed. What’s the dealio, Pink?

Tagged as Pink, Raise Your Glass

What Do You Think?

Ok so I’m usually one of the first people to moan about the reality TV phenomenon yet hypocritically I sat there and watched the X Factor tonight.

Some of the talent is amazing but others not so much. Take Wanger for example, what a waste of space! And then next to that you have someone like Treyc, Mary or Rebecca who are all absolutely fantastic. They’re the kind of singers who send a shiver down your spine and make your skin come up in goosebumps.

Which is why I feel slightly embarassed to admit that my favourite performance of tonight’s show was One Direction. These five sweet looking teenagers performed a great version of Kelly Clarkson’s My Life Would Suck Without You.

I don’t know what happened but it brought a huge smile to my face. There’s something really nice about seeing them bonding and performing together on stage the way they do. Sadly though, it is their cuteness that’s getting them through. They aren’t particularly great singers but I think they have what it takes to be the new Take That…What do you think?

Surprise of my life!

So I went to interview two members of the JB Jazz and Blues Band earlier today for a profile piece. We met in The Comfy Pew in Gloucester and it was lovely. A very pleasant tea room.

We get talking and I ask the big question, “Why were you in Spaced?” Incase you’re unsure of what I’m talking about; Spaced was Simon Pegg, Nick Frost and Jessica Stevenson’s invention. It was a surreal cult TV series first aired in 1999 on channel four, containing the usual Pegg and Frost humour.
John Beckingham (founder of the band) turns round and says, “You know why we were on Spaced?” To which I respond, “No…”. He looks over and says plain and simply, “Simon’s my son.”

My face fell. Simon Pegg is my all time favourite comedy writer and actor and I was sat across the table from the man who is his father. At first I thought it was a joke and just sat there a little bit bewildered. Eventually all I came out with was, “Simon Pegg? I love him.” Yeah sad, I know.

To some of you, this little entry will mean nothing but to me, it means a lot. I felt like sharing as this news made my day! It was one of the best interviews I’ve ever done. They’re such sweet guys.

The Script – Science and Faith

The Script released their debut self-titled album in August 2008. It flew to the top of the charts as they wowed audiences with their catchy lyrics and cheeky twists on the rock genre. For you fans out there, the two year wait is over. The Script are not a one hit wonder band.

The Irish trio’s second album, Science and Faith, stormed into the top spot within the first week of its release. With it gliding back up into the number one position this week, surely this alternative rock band are doing something right?

Album artwork for The Script's Science and Faith

With album number two they’ve kept their sound the same. They still feel and sound like The Script should.The guitar riffs and drum beats remind you instantly who you are listening to as does Danny O’Donoghue’s (lead singer) powerful and soulful voice.

Lyrically this album is better. With lyrics such as ‘I have been disgraced been excommunicated from every holy place…’ from You Won’t Feel A Thing to ‘I hear the angels talking talking talking now I’m a dead man walking…’ from Dead Man Walking show the album’s theme through and through.

Taking a step away from relationship breakdown songs, such as Breakeven and The Man Who Can’t Be Moved, they’ve ventured into their roots. This album focuses on the social and economical aspects of life in Ireland and they’ve captured it perfectly.

Some songs are very reminiscent of their debut’s sound and theme such as If You Ever Come Back and Walk Away but this isn’t necessarily a bad thing. It’s balanced with those other songs that are completely different like track four titled Science and Faith.

The whole album is catchy, interesting and definitely worth a listen (or two). They’ve kept true to who they are by not radically changing to try and impress. Instead they’ve covered heavy topics in a simple way and it seems to have worked.

(Take a sneak peak The Script – Science and Faith).

Tagged as Science and Faith, The Script