The cogs have been spinning and turning and now resulting in The Grand Machine being fully operational.

Following on from the success of their first album Polarity and single Borderline, The Bloodpoets released their new album The Grand Machine on August 15. Since its release, the album has reached Number 13 on iTunes Australian Rock Charts.

The Grand Machine was sometime in the making, allowing the band to produce a rawer and high-energy sound to encapsulate the essence of their live show. The songs are a mix of light and shade while still maintaining catchy hooks. The album overall creates a loose story overall that can be enjoyed as a whole or with individual songs.

New single, Destroy the Sun, is out now.

The Grand Machine is a punk/pop/rock album where every song is a single (standalone track), however the storyline is carried throughout the album as a whole. In pieces it’s a typical album – as a whole with all the cogs spinning together, it’s art.

The Bloodpoets album The Grand Machine is looking to be the best offering from the band yet.

Spawned in early 2013 by charismatic front-man and chief songwriter Mik Davis along with bassist Neil Short and tubthumper John Bradford, Monster Jaw hail from the gritty northern cities of Leeds and Newcastle. Drawing inspiration from their blue collar surroundings, the trio also pull influence from the song writing wizardry of Neil Young and Kurt Cobain through to the moody garage rock musings of The Jesus and Mary Chain and the post-grunge drive of Stone Sour. 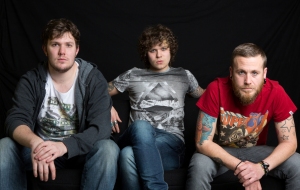 Over the past year, the animated upstarts have toured throughout the UK serving up a resonant and atmospheric post-garage punk sound that is coupled with a tight, electrifying stage show. Successful supports with Stiff Little Fingers and New Model Army on their UK tours have only furthered the band, along with lauded acclaim from Big Cheese Magazine, heavy rotation from BBC introducing and widespread underground radio.

Monster Jaw also have a strong DIY ethos and decided to self release their debut EP, Get A Tattoo, on their own record label Cobra Kitten Records. With national distribution set up for this and future releases, the band have the resources to take their music to the next level. The assiduous three-piece drafted in London-based Belgian producer Wes Maebe (The Libertines, Roger Waters and Robert Plant) to work on their debut EP and his expertise really shines on what is a formidable record. The EP’s namesake Get A Tattoo gets things rolling, showcasing the trio’s deft ability to lay down an alluring slab of post-garage rock that packs a highly contagious refrain. The driving punk rock givings of We Don’t Care About Anything is next up, highlighting the band’s raw sincerity and authenticity. Lastly, Summer Girl, with its atmospheric groove and soaring vocals, shifts gears and tips its hat to The Pixies in passing. Now armed with a killer record, Monster Jaw are set to raise the bar with further touring throughout the UK.

After a hugely successful 2013, Cairns-turned-Melbourne music juggernauts and kings of punk influenced pub rock Drunk Mums are back with the release of their highly anticipated new single, Plastic. To celebrate, the band will embark on a national tour including shows in Melbourne, Sydney, Brisbane and Adelaide as well as a handful of regional shows.

The track is a perfect fusion of the band’s 70s jangle pop and Aussie rock stylings, heightened further by the anthemic, charge-your-arms-in-the-air chorus.

After rampaging through pubs and venues across the country, the five-piece have amassed a huge following. Their brand of Aussie garage/slacker rock plus the lads’ wild, rowdy stage theatrics, has exposed the band to listeners far and wide – over 28 million of them, in fact.

Chitty Chitty, an original track by the group, was the background song to the YouTube smash hit Dragon Baby. Adding to the virality of the clip was the decision to screen the short to 64% of US film screens in November last year.

The band have played alongside indie heavyweights Guitar Wolf and Personal & The Pizzas and last year also saw lead singer Dean Whitby cap off 2013 by supporting legendary guitarist Johnny Marr (The Smiths) for his sold-out shows at the Corner Hotel and the Northcote Social Club.

Introducing…The Age Of The Universe

For ages, men have been gazing at the night sky, wondering at the beauty and mystery of the universe. We don’t really consider it, being so busy living through our daily routines, but if you think about it, the entire concept of this existence is even wilder than the most imaginative science fiction work.

The Age Of The Universe set out to capture these fascinating thoughts and visions through their own blend of alternative rock.

The band’s debut studio effort, Singularity, is an unpredictable and uncompromising cocktail of punk, alternative rock and psychedelia: think members of Pink Floyd jamming with someone from Muse and Black Sabbath. They have recently revealed the lead single, Alive, which is accompanied by a video directed by Grzegorz Telenga and Krzysztof Wróbel.

This is in-your-face and inspirational rock music that lingers on the echoes from the 70s yet looks forward to a creative and personal future.

The Age Of The Universe’s album, Singularity, is available to buy now.

Paws are set to release their second album, Youth Culture Forever, on June 2 via FatCat Records. The album saw the band decamp to a studio in the woods just outside New York to hone and expand on the sound that saw their debut Cokefloat! acclaimed by the likes of Pitchfork, BBC music and nominated for the Scottish Album of the Year Awards.

Recording at Adam Pierce’s (Mice Parade/ Swirlies) studio in the woods outside of New York City, Paws produced the album themselves in an attempt to strive for the sound that they had always imagined for the band. As Phillip Taylor from the band says: “It feels like everybody considers our debut LP to be lo-fi which really bothered us as we felt it was the complete opposite by comparison to our early releases”. He states that he wanted Youth Culture Forever to be: “…bigger and louder, softer and quieter” and to “…present the potential of our dynamic range more accurately than the first album”. This can be heard right from the album’s opener, Erreur Humaine which opens with Taylor playing a gentle, lilting guitar riff and ruminating on the end of a relationship with typical searing honesty before the full band explode into life, sounding heavier, fuller and darker than ever before.

Tongues is a happy go luck tune with its upbeat, summery sounds and those pleasant harmonies that add something, making it more of a sing-a-long song. Tongues combines the elements of Cokefloat! that made it such a thrilling debut; an expert use of dynamics, an anthemic chorus and painfully honest lyrics while incorporating an increased use of texture and expanded instrumentation.

Someone New is that angry infused song that everyone needs after a relationship break down. Someone New speaks about seeing your ex partner with someone new, “Do you wanna the truth?/Do you wanna know the truth?/I’d rather pack my bag and leave this town/Than risk the chance of seeing you around…with someone new/You’d promised me we’d be friends/No I never want to see you again…” It’s grungy, powerful and angst ridden. Someone New is the perfect song for when you’re having a bad day.

Owl Talons Clenching My Heart is a solemn track with grungy, distant sounding vocals. They’re droning yet this song is surprisingly comforting with its swooning guitar riffs and jagged bass line.

Give Up explodes with the lyrics, “Tired of acting like I don’t care/You know I care…”. Give Up is another brilliant punk rock song which you are instantly able to sing-a-long to and jump around like an idiot to if you so wish. It would make an excellent live track. This song will lift you out of your seat immediately – your feet can’t help but tap along.

Alone is the ballad of album, it’s entirely different from the previous tracks. It appears just before half way through breaking the album’s lovable yet slightly repetitive sound. It allows the album to breath and introduces a completely different side to this band. Alone shakes up your opinion of Paws – you thought they could just do grunge and punk rock but they have this surprisingly gentle side. The vocals on Alone are outstandingly beautiful – they’re raw, exposing true feeling behind the words.

The title track YCF is so blissful in comparison to the other songs on the album. It’s acoustic and sounds as if it’s been recorded in someone’s bedroom on a whim. The vocals are gravelly, gorgeous yet grungy. As the penultimate track for the record, it has the perfect blend of everything.

Paws Youth Culture Forever is to be released on June 2 on FatCat records.

Salt Lake City rock band Change To Fire announces the upcoming release of their new EP, Our Bodies In The Gears, produced, mixed and mastered entirely by the band themselves in their tiny practice space which is covered floor to ceiling with old punk rock flyers and Stars Wars memorabilia.

The album’s lead single, Big Apple, 3 AM, was released on May 13, in advance of the album. The song gets its name from the old Teenage Mutant Ninja Turtles arcade game, Turtles In Time. Lead singer Blue Alvey describes the song as being about: “…people putting a price on one another, using religion as the basis. It’s about breaking free of that mentality.”

Guitarist and producer Brad Rhoades describes the seven track EP as: “…short, sweet and straight to the point. We wanted to keep it punk rock and real but still add some pop shine to each song.”

The single is now available for free download through Change To Fire’s official website, http://www.changetofire.com where you can also find a music video supporting the single as well as photos and additional information.

Due for launch on 28 April, the Dirtbox EP is their official introduction to the world. Dirtbox is a malignant burst of gnarled riffs and snarled vocals that give a glancing preview of the whiplash inflicted at their live shows.

In their short but colourful existence they have pranced about stages with the likes of LetLive, The James Cleaver Quintet, Bastions, Wet Nuns and Exit International and recorded a live Radio 1 session for BBC Introducing. Citing their influences as “all of the things”, Falls provide a dynamic and compelling sound which is compounded by their energetic and at times confusing live shows.