Just after their hometown festival, Liverpool Sound City and their Great Escape Festival performances, Death At Sea reveal the second track from their new single and a video to accompany it.

Shy Kids follows a-side track Glimmer which went online a few weeks ago, breaking the silence from one of Liverpool’s most exciting new acts as they prepared material for their debut album. This new song completes the two-track single which was released on 7” vinyl and limited edition cassette through Kissability this week, 5 May.

Awash with the depth and danger of maritime nightmares, Death At Sea are the place where coruscating noise meets haunting pop melody and engrossing lyrical honesty.

After causing a commotion with their debut single Drag/Selfless and Haim tour support a year or so ago, the quartet have been quietly honing their craft and are excited to reveal some new music and live dates.

These new songs continue to reveal tangible influences from Death At Sea’s diet of luminaries such as Echo & the Bunnymen, The Strokes and Pavement yet the quartet’s sound is decidedly 2014 and Glimmer/Shy Kids marks the start of what looks to be a very exciting year for them.

You can catch Death At Sea live on the following dates:

Among Brothers – I Am Certain

Cardiff based chamber pop sextet, Among Brothers, have set the date of release for their double A-side single I Am Certain/I Do Not Believe. The single is due for release on November 19.

Among Brothers unleashed their debut EP, Homes, back in 2011 through their own label, Barely Regal Records and have since gained more and more attention in the music scene especially from the likes of BBC Introducing. They followed their debut with single release, Keep, which was released through Kissability and released digitally through Young & Lost club. 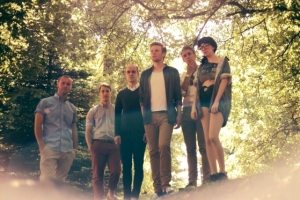 I Am Certain was premiered online last month on Soundcloud. You can listen to the track here.

Among Brothers remind me of a band I’ve recently discovered called Digital Antique. Both bands use orchestral sounds in their music which make the songs sound classical to some extent but not classical in the way you are thinking. Once you’ve had a listen to I Am Certain I’m sure you’ll understand what I mean…

By using orchestral sounds in their music, Among Brothers have produced songs that are much more anthemic and cinematic than other bands. I Am Certain is a full bodied, punchy track with great sing-a-long melodic lyrics such as “Part the skin/touch the blade” and “Pursed your lips/kissed the wound/took the pain into your form”. It’s a track you can instantly fall in love with.

I Am Certain/I Do Not Believe is set for release on November 19 through Too Pure Singles club. You can catch Among Brothers live at the following dates:

Tagged as Among Brothers, BBC Introducing, I Am Certain/I Do Not Believe, Kissability, Too Pure Singles club, Youth & Lost Club