The elegant and innovative songstress Elizaveta is climbing the iTunes pop charts with her new single Hero which is currently at #62 after its March 17 release.  A remix of the song created by the electronic music duo, Pegboard Nerds, featuring Elizaveta’s vocal, is featured in the incredibly popular viral video Superman With A Go Pro which commanded over 10 million views on YouTube in just one week. Hero also appears on her upcoming release, the Hero EP, out on April 14.

Elizaveta said: “When I was approached by Pegboard Nerds, Hero was in the final mixing stages. I feel the resulting track has taken my song in the right direction and amplified its epic qualities. I loved the Superman with GoPro video and it was incredible to watch something become viral naturally like that. I have already been contacted by other artists to do more collaborations of this kind and I can’t wait to see where this new avenue takes me creatively.”

Lauded as “…a brilliant musical innovator” by CBS, Elizaveta’s music has been featured in films and TV shows such as Pretty Little Liars, So You Think You Can Dance and Scandal among others. She has toured widely both in Europe and the United States and is currently touring in her native Russia with ultra-popular Russian stars B-2 and a symphony orchestra and has an upcoming performance on April 5 in Minsk, Belarus for 15,000 people.

New York-based trio Dirty River are preparing for the release of their debut self-titled album due out April 15 via Fleeting Youth Records. But in the mean time, they have revealed their first single, Releaf.

Releaf is a smartly penned tribute to weed personified by two separate encounters with two different women. Lead singer Forrest Hackenbrock’s austere vocals crawl like freshly exhaled smoke over tramping drums and hazy guitars that’ll leave you just as relaxed and euphoric as the leaf he pays homage to.

Dirty River’s 11 track self-titled debut is a great introduction to a band that understands the power minimalism imposes on rock music and the majority of its listeners. Dirty River’s bare approach forces their purges to penetrate and cloak your soul in their own lewd dreck, leaving you feeling dazed and dirty– just how rock and roll is supposed to make you feel.

Recorded during sessions at the famous Abbey Road Studios in February, the limited edition 7″ vinyl features covers of Up in the Sky by Oasis and Tender by Blur. The Record Store Day exclusive release will be available at independent record stores around the UK on April 19.

Founded in 2007, Record Store Day takes place on the third Saturday of April each year, bringing together artists and independently-owned record stores to celebrate the art of music. Special vinyl and CD releases and various promotional products are made exclusively for the day and sold in independent stores around the world.

For more information and to see which stores are participating in Record Store Day UK, head here.

The Temperance Movement’s self-titled debut album is out now, having stormed into the charts at number 12 on its release in September 2013.  Get the album in Europe on CD, vinyl and cassette tape at here.

The album is also available now on iTunes, including two bonus tracks here.

Castor Troy To Release Their Debut Album, Across The Water

Castor Troy serve up an instantly gratifying explosive fusion of heavy alt-rock complete with delectable hooks and colossal riffs. Already chalking up favourable comparisons to Alterbridge and Alexisonfire, Castor Troy are set for new heights, and are fully armed with their stunning debut album ‘Across The Water’, which drops on Monday 26th May through all stores. 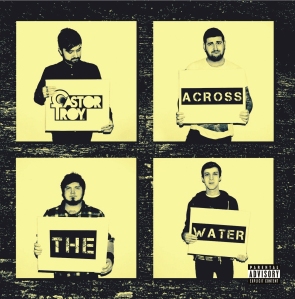 Through widespread gigging throughout the North and radio support from BBC and Kerrang! Radio, the rising quartet have acquired a solid following. The band are now set to strike out to the nation in support of their forthcoming album, Across The Water. The astute combo took their time creating the album, ensuring that every facet of their sound was finely tuned. After nearly a year’s worth of work, the band have now fully completed the record and it hits stores this May.

The album kicks off with the instrumental melodic teasing of Chapter One, before Winter Lights sparks into life with its ball-busting riffery and killer refrain. The pace continues to build with the impressively crunchy low- swung groove of Undivided before the band strips down proceedings with the hauntingly majestic Nineteen. The four piece up the ante again with the record’s namesake, Across The Water and the track certainly makes the grade with its raucous delivery and gigantic chorus. The album then draws to a close with the potent The Condemned which swings and sways with gliding ease before beating your senses into submission. Look out for the band as they hit the road this Spring and stay tuned to their Facebook page for updates.

Castor Troy will release Across The Water on May 26.

It’s been over three decades since Christchurch record shop employee and music fan, Roger Shepherd, was inspired to start a record label as an outlet for South Island bands. And it was the city of Dunedin that quickly became most strongly associated with Flying Nun.

In 1982, four bands from that southern outpost – The Chills, Sneaky Feelings, The Stones and the Verlaines – each recorded a side for a double 12″ EP pack that, which actually untitled, was referred to as the ‘Dunedin Double’. Now for Record Store Day (April 19), Flying Nun will to re-issue this four EP set that went on to kick start the label.

Not only was it ‘untitled’, it was an unusual format with no set order and containing two 45rpm 12″ discs. Re-mastered, the Dunedin Double is being re-issued again in its original format and limited to 2000 copies.

Recorded over two weekends in damp New Zealand, South Island flats (on portable four track by Chris Knox and Doug Hood), it was distinctly lo-fi and in tune with the ‘do it yourself’ ethic at the heart of the label. Furthermore it brought the world’s attention to The Chills, Verlaines, The Stones and Sneaky Feelings and established the notion of the ‘Dunedin Sound’, a phrase coined for the young bands that followed in the wake of The Clean and an influence which carries on to indie-pop bands around the world today.

Released the same year as the Dunedin Double (1982), it introduced the music of a 17-year-old Shayne Carter who would later go on to form The Double Happy’s and Straightjacket Fits. In the tradition of many great bands, they formed while attending high school, debuting at the school’s talent contest in 1979 and going on to play a show supporting Toy Love.

Featuring Carter as vocalist, the band included the likes of Wayne Elsey (The Stones, Double Happys), Terry Moore (The Chills) as well Fraser Batts, Jonathan Moore and Jeff Harford. The band broke up in 1981 before Who Killed Colonel Mustard was released. However, they left behind four catchy tracks, packed with teenage angst manifested in early punk stylings.

As part of the Record Store Day release, the EP has been remastered and includes an insert of previously unseen photos. This EP will be limited to 1000 copies.