Kicking off 2014 with a bang, the latest single, Pearly Gates, is available online now. Even better than this, the band have announced an extensive list of European tour dates including six in little old blighty. 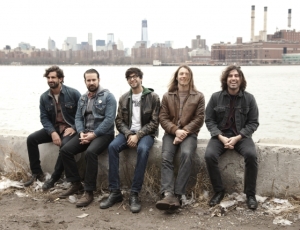 After spending most of 2011 and 2012 writing albums including last year’s New Moon, The Men decided it was high time to put their feet up. Fortunately for us, this wasn’t to be. Instead they began creating new material while holed up in founding member Mark Perro’s Bushwick bedroom. Emerging three months later the boys had cut more than forty demos which they quickly made into thirteen recorded tracks.

But their work wasn’t done yet. From these thirteen, eight were chosen for the boys new LP to create the playfully named, Tomorrows Hits, with the track Pearly Gates being chosen for single release.

Pearly Gates is typical of The Men’s flirtatious relationship with genre and is decidedly upbeat. The cheery rolling gait of the track carries it for approximately a minute before Perro’s gravelly voice kicks in and reminds the listener why The Men are so consistently fresh. Full of surprises, such as Perro’s throaty groans coupled with the odd Glissando, the track provides an exciting six minutes and nineteen seconds of pure musical indulgence. Similarly, the contrast between Perro’s tuneful whine and the jazzy tinkle of the piano instantly injects the listener with a shot of warm fuzziness that showcases The Men’s signature ability to bend the rules of rock.

The Men’s new album, Tomorrow’s Hits, will be released on March 3 via Sacred Bones.